Season 6
The town of Beacon Hills, California is the main setting for MTV's Teen Wolf.

The fictitious town is within an equally fictitious Beacon County, California, where most of the series' action takes place.

It seems to reside in a valley area surrounded by hills with suburban homes, high rise urban areas and forested wilderness.

While the show was presumably set in Northern California, most of the 100 episodes were filmed in the Los Angeles area.

Seasons 1 and 2 filmed in and around Atlanta, Georgia before the production was lured to LA with California tax credits that paid for much of the show's budget.

Many of the locations used in the filming of Teen Wolf offer at least limited access to the public.

Beacon Hills High School is in Beacon Hills and one of the main settings of Teen Wolf. The school was established in 1941.

During Seasons 1 and 2, exterior and interior scenes at Beacon Hills HS were filmed at the old Briarcliff High School in Dekalb County, Georgia outside Atlanta.

In Season 3, when production shifted to California, Palisades Charter High School was used for the exterior and a few interior shots of BHHS.

The production also built a school hallway and classrooms at their main studio in Northridge, California for interior scenes. The set was moved to a warehouse in Chatsworth, California shortly before the Northridge location was torn down. It is still in use today. The Paramount Television show Heather's filmed on the stage after Teen Wolf production ended in 2017.

Dr. Deaton, runs the Clinic and Scott McCall works as his assistant after school.

According to the signage on the door, the clinic is open from 7:30am to 5:30pm - Monday through Friday - and on Saturday by appointment. 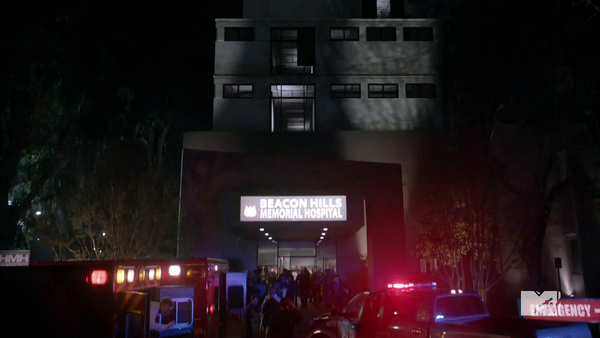 Beacon Hills Memorial Hospital located in Beacon Hills, California is the setting for much of the action in Teen Wolf.

Scott's mother, Melissa McCall works at the hospital as a nurse.

Much of the action at the hospital in Seasons 3-5 occurred on the roof, which was actually the backside of the Northridge, Studio.

Until the production moved to Chatsworth in Season 6, the front exterior of the Teen Wolf Production Office on Balboa Blvd. was used for the first floor and exterior of Beacon Hills Hospital with some CGI work to add additional floors above.

The hospital corridors and treatment rooms are sets inside the Teen Wolf studios.

The Hale House was a fire-damaged home in a wooded area of Beacon Hills, California.

It was demolished to make way for new construction in Season 4.

It is the former home of the Hale family.

The house was burned down by a pair of arsonists at the behest of Kate Argent six years before the beginning of Season 1.

This is the residence of Scott McCall and his mother and for awhile, Isaac Lahey. Scott and his pack would use this house place to protect people as seen in Venomous and Silverfinger.

This was the residence of The Argent Family in Season 1 and Season 2. It also served as the headquarters for the Hunters when planning their attacks.

This is the residence of Lydia Martin, her mother, and formally her father. It has a pool and a courtyard behind the house.

Lydia's mansion is the place where she throws the best parties. (Wolf Moon, Party Guessed)

The was residence of Jackson Whittemore until he moved to London. This is where he attempted to film himself transforming into a werewolf only to turn into a kanima. (Shape Shifted, Frenemy)

Matt watched from another video feed a few feet away and eventually made his bond with the kanima from there. (Fury)

The home is across the street from the Lahey house.

Isaac Lahey and his father lived here until the emergence of the Kanima. Coach Lahey used to abuse Isaac here and sometimes chained him in a freezer in their basement. (Shape Shifted)

Matt Daehler almost drown in their pool due to the swim team being drunk and careless. (Fury)

In the episode Pack Mentality, Allison, Scott, Lydia, and Jackson went on a double date at a bowling alley. The location has not been used since.

In the episode The Tell, The Alpha Werewolf attacks and kills the manager of the Video 2*C video rental store. Jackson and Lydia were customers at the store. The location has not been used since.

Introduced in the episode Omega, the Beacon Hills Cemetery was run by Mr. Lahey and his son Isaac Lahey worked there as a gravedigger. Kate Argent's casket is buried there.

Much of the outdoor action on Teen Wolf takes place in the Beacon Hills Preserve. It is a large wilderness area which seems to surround the town.

Half of Laura Hale's body was found in the woods there and it is where Scott McCall was first bitten by a werewolf in Wolf Moon.

The Nemeton is located in the preserve making it a focus of supernatural attention.

Allison, Scott, Lydia, and Stiles go on a "date" to the ice skating rink after closing time in Ice Pick. Boyd worked at the rink.

Derek's pack, with the exception of Boyd, fought Scott there.

Jungle, a dance club, was featured in Frenemy. It was the scene of an attack by the Kanima on a number of the club's patrons including Danny.

Sheriff Stilinski's office and the rest of the Beacon Hills Sheriff's Station has become one of the more frequent locations used in Teen Wolf.

The Season 2 episode Fury was set almost entirely inside the station. Since the Sheriff became aware of the supernatural elements within the town, much of the planning and investigation work during each season takes place in the station.

The Sheriff's office and most other parts of the station are sets built at Teen Wolf studio in Northridge, California.

The jail cells and some exteriors seen in Season 3 were shot on location at the Los Angeles Police Museum in Highland Park, California.

Much of the action in Teen Wolf happens in an industrial area consisting mostly of warehouses.

Notable appearances of this area of town include the Kanima chase in Frenemy, the attack on Scott by Victoria Argent in Raving and the Season 2 finale Master Plan.

Since the production moved to Los Angeles after Season 2, much of the Warehouse District scenes take place behind the Teen Wolf studio in Northridge, California. The production also uses real warehouses in the Los Angeles Arts District around the 6th Street Viaduct.

The abandoned Beacon Hills Railroad Depot was used as a home by Derek Hale during Season 2.

Scott and Stiles visit a local Tattoo Parlor in Tattoo.

Beacon Hills First National Bank went out of business after a team of burglars managed to break in to the vault.

A few years later, The Alpha Pack used the bank's Hecatolite lined vault to hold Boyd, Erica and Cora prisoner and deprive them of the light of the moon. Erica was killed there.

In Chaos Rising, Derek and Scott break into the bank to rescue their friends.

The location was used by the Darach as a sacrifice spot. (Currents, Alpha Pact)

This abandoned mall is where The Alpha Pack and Derek's pack fought each other after Derek failed an attempted ambush and Scott's attempt at diplomacy. (Frayed)

Chris Argent comes to this location to investigate the events of the battle. (Motel California)

There is an abandoned distillery on the outskirts of Beacon Hills. It was a meeting place for several packs of werewolves as seen in Visionary. It was also where Gerard set a trap for Deucalion and where the final battle between Derek, Scott, Deucalion and the Darach played out in Lunar Ellipse.

The production used a real building outside Acton, California for the exterior. The interior was a set built at Teen Wolf studio in Northridge, California.

The production used a real house for the exterior shots. It is located in Granada Hills, California and is known professionally as the Lisette Film Set. The interiors are filmed at Teen Wolf studio in Northridge, California. 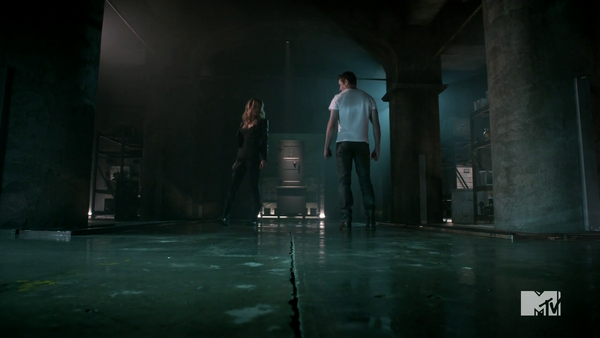 Located underneath the high school sign, The Hale Family's Vault houses some of their personal items. It can only be opened by a Hale family member with their werewolf claws.

Kate attempted to use Derek to break into the vault to steal what she thought was a magic amulet to help control her werejaguar side. (117)

Scott, Kira, and Malia enter the vault through back entrance in the school to hide their distemper induced shifts. (Weaponized) 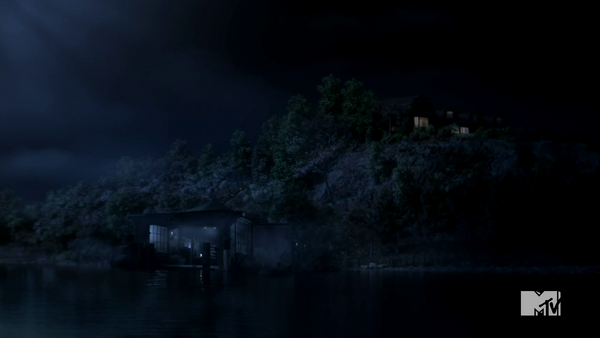 Lorraine Martin, Lydia's grandmother, owned a lake house near Beacon Hills where she also had a soundproof room with a record player to help her understand her abilities.

It also housed the computer that was the source of The Benefactor's dead pool.

The exteriors of the main house were shot at a real home in the Hollywood Hills. The boathouse was built at the Teen Wolf Studio in Northridge, California. It included a small pool of water within the set. A green screen was used to give the impression of the larger lake beyond.

Sinema, a dance club, is featured prominently in Season 5. Hayden works at the club as a "shot girl" while Mason, Liam and Brett are customers and Phil (Billy Snow) is the head bartender.

Lucas attacked Mason and Liam at the club. Scott and Kira fought him there in Condition Terminal.

In Lies of Omission, a showdown between the Dread Doctors and Theo, Scott, Liam and Hayden takes place in the club.

The interior of Sinema is a set built inside Teen Wolf studio in Northridge, California the exterior is shot outside the studio building. 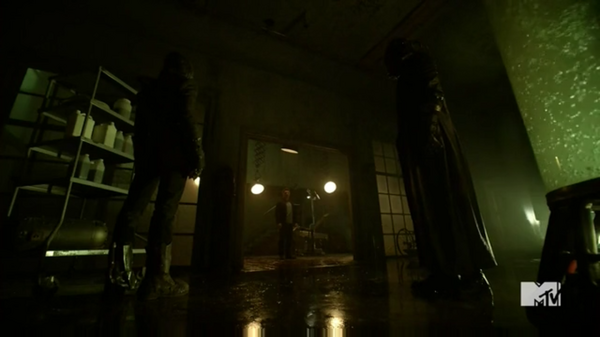 The Dread Doctors' Lair was where the doctors carried out their experimentations on the teenagers of Beacon Hills in Season 5.

In Ouroboros, Scott, Malia and Mason search for the lair but end up nowhere, overlooking the Ouroboros symbol in the tunnels. It was later revealed to be within the Preserve in The Beast of Beacon Hills. 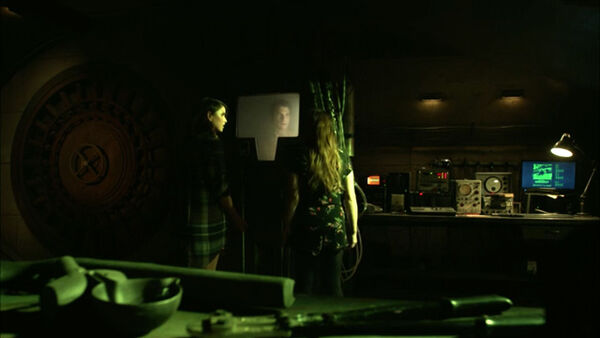 This bunker became Chris and Gerard's base operations in Season 5 and Season 6.

Here Parrish and Lydia find out about there supernatural origins and the story of Marie-Jeanne Valet. (A Credible Threat, Maid of Gevaudan)

Later, it was used as a safe house for targets of the Ghost Riders and Scott, Malia and Lydia use the cooling chamber used on Parrish in A Creditable Threat to remember their friend Stiles. (Relics, Memory Lost)

According to Sheriff Stilinski, Beacon Hills population is nearly 30,000 while Beacon County is home to nearly 500,000.

In the Season 3 episode Currents, we learn Beacon Hills is actually a "beacon" calling out to supernatural people and creatures. Telluric currents running under the town focus energy on a sacred druid space know as the Nemeton.

The concept of the town being a supernatural beacon came long after Executive Producer Jeff Davis chose the name. He picked "Beacon" because the name of the town in the Teen Wolf (film) was "Beacon Town". He added "Hills" because he thought it sounded better.

There is no real world equivalent for Beacon Hills.

There are three different zip codes presented over the series.

In addition to the postal codes, we've also seen area codes "925" (Alameda and Contra Costa Counties) and "415" which would place the phone inside the city limits of San Francisco, California.

In Said the Spider to the Fly, it's mentioned that Malia’s flight to Paris would depart from the San Francisco International Airport. This suggests Beacon Hills is somewhere in Northern California.