Code Breaker is the twelfth episode and Season 1 finale of Teen Wolf.

Scott is caught in the middle of a war between hunters and werewolves, and he enlists the help of both his friends and enemies to stop the mysterious killings and win back Allison.

Allison is going to be removed from the town for her own safety since so much is going on that involves people of the town.

Allison wants answers but everyone wants her to stay quiet and they don’t want to reveal too much. The only person who can find the Alpha is Scott McCall and now it is time to call upon him to fix what’s going on. Allison cannot stop thinking about Scott and how much she cares about him; all the things that they said to each other.

Stiles needs to help hack in to Scott’s laptop; he claims that he can’t but that is not the answer Peter Hale wants to hear. Derek and Scott are both needed to kill the Argents and Stiles is needed to find Derek so everyone must help each other to survive. It is discovered that both Scott’s username and password on his computer is Allison.

Derek Hale is being kept at his own house, which is the big shock for the head of the pack but they will find him regardless. Lydia Martin’s life is in question when she is rushed to the hospital, half dead after the semi-formal. Allison stops at the hospital to see Lydia who was bitten and turned in to a werewolf so she can fully understand why she must leave. Even Scott is a threat to her and no one is safe in the town. Stiles is offered the “bite” to become a werewolf, that is if he doesn’t die. Scott was taken first but Stiles could have very easily been bitten as well as he watched his best friend become the big man on campus. Stiles refuses the bite though it seems that he somewhat wants this werewolf power and to be a part of the pack.

Stiles arrives at the hospital, where Lydia keeps going into shock in her hospital bed. It is questioned whether or not Stiles or Scott saw anything; Stiles claims he knows nothing. Jackson and Stiles are constantly questioned about where Scott is; they decline to say. There is apparently nothing scarier than seeing a friend turn into a werewolf and having to lock them up to save yourself, as Chris explains. Stiles retorts, bringing up the Hale Fire and how a hunter broke their code of conduct.

Scott and Derek are in the woods when Derek is shot with two arrows by Allison. She then fires a flash grenade arrow, blinding Scott. Derek gets up and pulls Scott with him, attempting to escape. Scott is confronted by Allison. She does not believe that everything Scott did was to protect her. Kate tells Allison that they now have to kill the captured werewolves. Allison says that she thought they were only going to catch them. Kate replies by saying “We did that, now we kill them.” To prove her point she shoots Derek with a gun. She realizes Allison won’t kill Scott and is about to do it herself when Chris steps in, claiming there is no proof that he has killed anyone. He also reveals he knows about Kate's involvement in the fire with Kate declaring she did what she was supposed to. Chris tells her no one asked her to murder innocent people; revealing that there were children both human and werewolf in the house. When she doesn’t put her gun down, Chris pulls one on her.

The Alpha then appears and begins to circle them. It knocks Chris to the ground, and drags Kate into the house to face her death, while Allison has no idea what to believe or think of all these new revelations. Kate is told to apologize for burning the house down. She chokes a sorry out, and Peter rips her throat out, claiming it wasn’t sincere enough, right in front of Allison. Scott comes to save Allison and tells her to go outside. Scott and Derek then attack Peter. Peter knocks Derek out, while him and Scott take the fight outside.

Meanwhile Stiles and Jackson are on their way to find Scott. They arrive at Hale House to find a fully transformed Alpha.

Stiles throws one of the "self-igniting" Molotov cocktails at it. The Alpha snatches it out of the air.

Scott tosses Allison her bow, she shoots the bottle of volatile liquid and it bursts into flame. The Alpha's arm is on fire and when Jackson throws his own cocktail the creature is engulfed by fire.

Scott remains in werewolf form until Allison kisses him. When he asks why she kissed him, her answer is that she loves him.

Despite a protest from Scott, Derek goes to his uncle. Then, with one slash to the burned Peter's neck, Derek kills him and becomes the Alpha.

Stiles and Scott return to the hospital to find that Lydia in is not a werewolf because her wound isn’t healing leaving the question of what she is. Jackson goes to see Derek, and asks again for the bite.

The newspaper headline suggests Kate Argent will be officially blamed for all the murders and linked to the Hale House Arson. Chris and Victoria discuss the imminent arrival of more Hunters and what they should do about Scott.

Up on the roof, Allison and Scott are together staring at the moon.

Scene: Derek breaks free of his chains and says he will help Scott.

Scene: Allison kisses Scott with him as a werewolf. 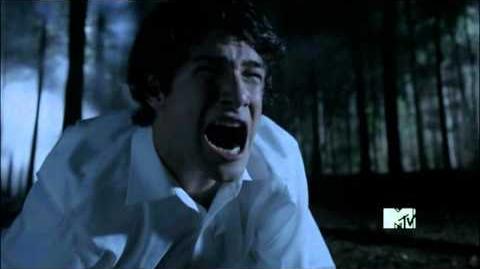