View source
watch 01:55
Cobra Kai Season 4 - The Loop
Do you like this video?
Play Sound

Derek Hale is one of the main characters in the first four seasons of MTV's Teen Wolf.

Derek initially served as a mentor to Scott McCall, but the relationship soured after Derek became an Alpha and began making choices Scott found immoral.

Despite this, Derek has remained loyal and continues protecting and fighting alongside Scott against numerous supernatural threats.

Derek was born into a family of werewolves. His mother, Talia Hale, was much respected within the werewolf community meaning Derek came into contact with members of a number of other packs.

He and his family lived in Hale House in Beacon Hills, California and he attended Beacon Hills High School.

Peter Hale claims a 15-year-old Derek conspired with an Alpha (Ennis) to have Derek's girlfriend (Paige) bitten in hopes of turning her into a werewolf.

The process didn't take and, to end her suffering, Derek killed her. Having taken an innocent life, his eyes changed from yellow to blue.

Sometime later, Derek entered into a relationship with werewolf hunter Kate Argent. She used him to gather information on his family making him an unwitting accomplice to the arson fire at Hale House that killed most of his family.

After his Uncle Peter killed the conspirators involved in the fire, Derek killed him and took the status of Alpha Werewolf.

In order to save the life of his sister, Cora Hale, long thought dead in the fire, Derek gave up the spark that made him an Alpha. His eyes turned from red back to blue.

Kate somehow physically regressed Derek back to the age of 15. While he was eventually restored to his proper outward appearance, he lost all of his werewolf traits and abilities.

Derek apparently died for a little while in Mexico. The whole process - losing his abilities and dying - had been one of evolution. He now has the ability to shift his body fully into wolf form.

Derek searches for the werewolf that killed his sister, Laura Hale, while helping Scott deal with his new status by teaching him to control his new nature and trying to avoid psychotic ex-lover Kate. (Read More...)

As a new Alpha, Derek sets about building his own Teen Wolf Pack. He tries to track down the Kanima which places him at odds with Scott who is trying to protect his friends. (Read More...)

The Alpha Pack tries to get Derek to kill his pack to become like them. He finds his sister Cora, long thought dead, and loses two of his Betas and his Alpha status.

Derek is captured by Mexican Hunters, jailed with Chris Argent and controlled briefly by a Japanese fox spirit. (Read More...)

Derek is seen, tied up and covered in cobwebs, in what appears to be an Aztec temple in Mexico. After Scott rescues him, Derek appears to be a 15 year-old boy. (Read More...)

Derek, regressed physically and mentally to the age of 15, returns to Beacon Hills. He doesn't remember the fire that killed his family. Kate convinces him to open the Hale Family Vault underneath Beacon Hills High School. (Read More...)

Derek hires Braeden to find Kate in hopes of learning what she did to him to cause his eyes to revert from blue to yellow. (Read More...)

Derek meets Liam Dunbar and advises Scott. He shows Chris the Hale Vault and explains that Kate did something to cause his recent eye color change and loss of powers. (Read More...)

He and Malia go in search of Satomi's pack. He finds an injured Braeden. (Read More...)

Derek takes Braeden to the hospital. He and Satomi unwittingly come up with the cure for weaponized distemper. (Read More...)

He admits to Braeden that all of his werewolf abilities are gone. She tries to teach him how to use a gun and they end up having sex. (Read More...)

Derek says he doesn't know what kind of supernatural Jordan Parrish might be. He and Braeden save Scott, Malia, and Liam from assassins. (Read More...)

Derek gets a late night visit from a screaming Lydia. He tells Scott the Dead Pool money is Peter's, not his. He explains that he owns his building and has other bank accounts. (Read More...)

Derek travels to Mexico and tries but fails to help Liam control his shift on the full moon. He is mortally wounded in a fight with a Berserker and apparently dies for a little while. He reemerges with the ability to shift fully into wolf form and manages to seriously wound Kate. (Read More...)

Had Tyler Hoechiln remained with the show, Jeff Davis had plans for secondary Season 5 plot involving Derek and the return of Jennifer Blake.

Video footage of Derek is shown at Stiles' FBI class where he is apparently on the run for mass murder in North Carolina. (Read More...)

He questions Hunters who tried to kill him and briefly reunites with Chris who attempts to convince to help fight Gerard in Beacon Hills. (Read More...)

While hiding out in the school, Derek is confronted by the Anuk-Ite, who takes on the appearance of Jennifer Blake, and turns him to stone. (Read More...)

After killing Peter, and becoming an alpha, Derek began to build a pack and increase his strength in preparation for The Alpha Pack's arrival. Derek did not fare well as an alpha, Erica and Boyd were killed by The Alphas, and Isaac left the pack. After losing everyone, Derek gave up his alpha spark in order to save Cora.

Derek and Peter being tortured

Derek scares some kids on halloween

Derek as a wolf 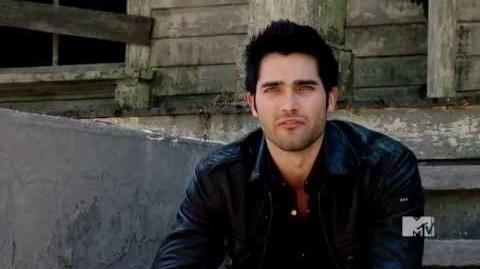 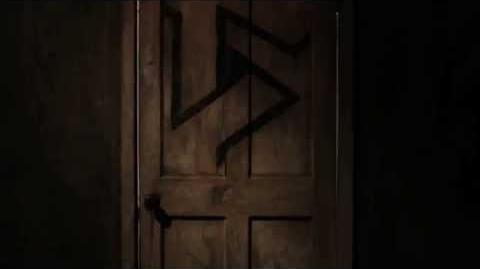