View source
watch 02:07
Spider-Man: No Way Home Trailer Dropped - The Loop
Do you like this video?
Play Sound

Deucalion is an Alpha Werewolf introduced in Season 3 of Teen Wolf and is played by Gideon Emery.

Deucalion speaks with a British accent. He was an Alpha in 1977 and, according to Gerard Argent, bit and turned Hunter Alexander Argent.

Sometime later he returned with his pack to Beacon Hills at the behest of fellow Alpha Ennis to seek vengeance on Gerard and Chris Argent for the death of one of his Betas. While Kali didn't seem to care, Deucalion sought peace by meeting with local Alpha Talia Hale and then trying to meet with the Argent hunters.

The meeting with Gerard was a trap and Deucalion was blinded. While still recovering, one of his Betas attempted to take over and Deucalion killed him. In doing so, he learned that Alphas become stronger when they kill their own Betas.

He then convinced both Ennis and Kali to kill their packs and join him, creating The Alpha Pack. He also showed the Twins, Ethan and Aiden (who were Betas at the bottom of their pack), how to merge together. Consequently they killed every member of their pack, saving their Alpha for last, and joined his Alpha Pack.

When he returned to Beacon Hills to claim Derek and Scott for his pack, he wore dark glasses and carried a cane with a spearhead concealed beneath the red tip at the bottom.

After multiple skirmishes, the Alpha Pack is disbanded and his eyesight restored as a way to weaken the Darach, Deucalion is given a choice to amend his ways or next time there would be no mercy. He made up for his evil deeds by aiding Scott's pack as a spy in Theo Raeken's pack and offered guidance to Scott when Gerard returned for revenge until he is mortally wounded by Tamora Monroe.

According to Ms. Morrell, who is a clinical psychologist and Druid emissary to Deucalion, he is on a "narcissistically psychotic" mission to form the "perfect pack" and, to that end, wants a True Alpha like Scott McCall to join him.

She says Deucalion's desire to possess Scott's uniqueness was in conflict with an equally strong desire to destroy Scott's potential to become a True Alpha by getting him to kill.

He quietly distracts Scott in the hospital elevator to keep the teen from seeking Isaac Lahey. He later strikes what appears to be the killing blow to a Mysterious Girl in the high school locker room. (Read More...)

We learn that Deucalion captured and held Boyd, Erica, and Cora Hale in a bank vault lined with Hecatolite depriving them of moonlight for four months and turning them vicious. He enlists Ms. Morrell to create a Mountain Ash barrier once Scott and Derek have broken into the vault, trapping them inside. (Read More...)

Deucalion explains to Derek how he accidentally discovered that killing one of his Betas allowed him to absorb their power. Once he became blind, one of his Betas felt he was no longer able to lead so he tried to kill him and take control. Deucalion bested him, killed him, and found that he became faster and stronger because of it. (Read More...)

At an abandoned mall he and his pack attack Derek's and Scott. He nearly forces Derek to kill Boyd until Allison shoots flash bolts to temporarily blind his pack. Later, at Dr. Deaton's, he kills the badly injured Ennis even though he is expected to make a full recovery. (Read More...)

In the motel, Scott hallucinates that Deucalion is standing outside with his mother. Deucalion states that Derek is dead and that Scott is the new Alpha. Due to these events, he is coming for Scott and "everyone he loves". In the final moments of the hallucination, Deucalion slashes Melissa McCall's neck with his claws. (Read More...)

Deucalion offers to tell Scott where Deaton is being held if Scott can take his cane from him. Scott fails. Deucalion gives him a stab in the shoulder and a cryptic clue, saying he should "follow the current". (Read More...)

Sometime in the past, Deucalion had requested a meeting with Gerard to discuss peace between the Argents and the packs. After being blinded by Gerard, he learns from Deaton that his sight would not return. A beta of his, Marco, attacks him, but Deucalion shifts and kills him. (Read More...)

Deucalion and Kali arrive at the hospital with the intent of killing Jennifer Blake, who Kali reveals to be her former emissary. The two bicker over their choices involving Scott and Jennifer. After a night of battle, Deucalion offers Scott aid in saving his mother and Sheriff Stilinski from the Darach. Scott leaves with Deucalion. (Read More..)

Deucalion and Scott join the other Alphas to capture and kill Ms. Morrell. When she tells Kali and the others that it was Deucalion who killed Ennis, he attempts to play it off as the desperate lie of a woman about to die. Deucalion then stabs Morrell with his cane to shut her up. (Read More...)

He shows his true face and his real motive for everything this season. After easily defeating Jennifer Blake, he tries to force Scott to kill her. Jennifer restores his eyesight. (Read More...)

He sends Braeden to save Derek from a group of hunters. (Read More...)

Deucalion reveals to Theo that his restored sight was only temporary and is willing to give info on The Beast of Gevaudan in exchange for Scott's eyes. (Read More...)

Deucalion tells Hayden that Theo will die if he puts on the siphoning talons due to not matching his genetic frequency. (Read More...)

Deucalion reveals that he allowed himself to be captured. Then he shows Theo how to steal power. According to him, the secret to stealing power is to "take their pain, take their life, take their power". (Read More...)

After being betrayed by Theo, Deucalion warns him that his willingness to stab anyone and everyone in the back will be his down fall. Its later revealed that he isn't really blind and that he's been working with Scott the entire time. (Read More...)

Deucalion refuses to join Scott and Malia in their fight against Gerard. He is no longer a killer, and has chosen the path of least resistance, which is demonstrated in his schooling of Malia. (Read More...)

He decides to teach Scott and Malia how to fight blind in order to combat the Anuk-Ite. After the lessons ends, he is shot up by Tamora Monroe and others hunters. (Read More...)

As he lies dying, holding Scott's hand, he tells the werewolf that Gerard's worst fear is that he will never beat him. (Read More...)

The character is named after a son of Prometheus, a Noah like character in Greek mythology. 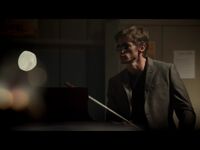 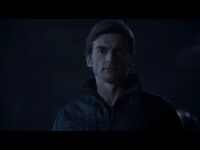 Deucalion Before Being Blinded