View source
watch 02:07
Spider-Man: No Way Home Trailer Dropped - The Loop
Do you like this video?
Play Sound

Dr. Alan Deaton is a recurring character in Teen Wolf and is played Seth Gilliam.

He is a veterinarian at Beacon Hills Animal Clinic where he is Scott McCall's boss and becomes a mentor to Scott and his friends on all things supernatural.

He's the older brother of Ms. Morrell who is also a Druid.

He is the former Druid Emissary to The Hale Family and had a very close bond with Talia Hale. His reputation stretched far enough that The Argent Family knew of him. However, only Talia and eventually Laura Hale knew of his existence within the pack.

Some time before her death, he made a promise to Talia that he would look after Derek. When Talia and most of her family died in a fire, he "retired" from his supernatural duties.

When Scott was bit by Peter, he decided to help him adjust to his new life without revealing too much about his past and subsequently brought himself out of retirement. However, he came clean when Stiles Stilinski figured who he was when a Darach began committing murders. Since then, he has been assisting Scott's pack in their supernatural investigations.

Deaton is questioned about recent animal attacks and whether or not he is The Alpha. After saving Scott from an attack, he reveals that he doesn't only treat animals. (Read More...)

Deaton refuses to tell Scott how he knows about werewolves until the emergence of Gerard and the Kanima. He shares his knowledge to Scott and is revealed to know of other threats coming to Beacon Hills. (Read More...)

Deaton reveals himself to be a Druid and explains its mythology and the correlation between them and recent sacrifices. He is nearly sacrificed himself and helps reignite the Nemeton in order to stop the Darach.

After learning that Stiles Stilinski is being possessed by a Nogitsune, he poisons it with Wolf Lichen in order to temporarily neutralize it in efforts to find a permanent solution. (Read More...)

Deaton helps save supernaturals in the middle of The Benefactor's dead pool and investigates Derek Hale's sudden power loss at the hands of Kate Argent. (Read More...)

When the Dread Doctors appear, he leaves to look for answers only to be captured by the Desert Wolf.

After being rescued by Malia Tate, he informs the pack of Dr. Valack's past deeds. (Read More...)

Deaton examines the blue shard of glass from the sheriff's impound lot as Scott tells him that pieces of his memory are missing. Deaton suggest that Scott's subconscious is trying to tell him what's missing. The easiest way to figure this out would be to sleep. (Read More...)

Deaton visits Eichen House and finds a slab with a drawing of a creature that Halwyn trapped in the Wild Hunt. He, Mason an Corey eventually deduce what the creature is. (Read More...)

He appears in a flashback from Pressure Test as Scott counts him among his allies. (Read More...). 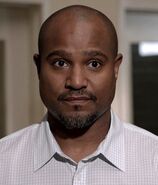