Creatures of the Night

Apotheosis (Only the Surgeon)

The Dread Doctors are the primary antagonists for Season 5 of MTV's Teen Wolf.

Dr. Valack says they’re not entirely human anymore. He says they were scientists who worshiped the supernatural.

Marcel, a bar owner and soldier in the French and Indian War, was a loyal friend to Sebastien Valet and covered his crimes as The Beast of Gevaudan. After his death, Marcel began to practice the farthest edges of pseudoscience and harnessed electromagnetic forces in order to bring back his friend. Along with two others, they used these forces to prolong their lives, give them power, and, most importantly, make people forget about them.

According to Dr. Valack, the doctors came to Beacon Hills prior to the McCall Pack's encounter and many people had died before leaving and only returned when the group reactivated the Nemeton. (A Novel Approach)

How they've been able to prolong their lives is from a Nazi werewolf, Garrett Douglas. Keeping him in a tube with green fluid, they inject themselves with it when necessary. (The Beast of Beacon Hills)

Their primary goal was create the perfect killing machine. They nearly succeeded with Theo Raeken who they described as "perfect evil," however, they discovered to create real evil was to "corrupt something good." Harnessing the power of La Bête du Gévaudan, they resurrect Sebastien Valet through Mason Hewitt.

Once the beast remembered who it was, it killed the doctors while they reveled in their success.

The Doctors kill Belasko after he failed to take out Scott McCall. (Read More...)

The Doctors stalk Tracy Stewart until she is lead to their lair where they inject her with mercury to "awaken" her. (Read More...)

The Doctors capture Donovan Donati and inject him with mercury and later kill Tracy after The Surgeon declares her condition is "terminal." (Read More...)

They continue their work and Donovan and later kill Lucas after he is deemed a failed experiment. (Read More...)

Lydia witnesses a flashback of them enhancing Josh Diaz and later The Pathologist attack Scott and Malia at the hospital. (Read More...)

The Doctors come after Hayden Romero and despite Scott's efforts, she and Liam are taken by them. (Read More...)

The Doctors perform procedures on Hayden and determine her condition is worsening. (Read More...)

They begin to track down their failed experiments and kill them off before the supermoon. (Read More...)

They appear the high school after a strange animal attacks some cops and back at their lair, The Surgeon destroys a wall to reveal a fresco and they declare success. (Read More...)

Lydia Martin sees a vision where the doctors make Theo a natural chimera with his sisters' heart. Later, they kill their last failure. (Read More...)

The Surgeon and Pathologist at the high school where they menace Theo and Tracy and warn him to leave as The Beast appears. (Read More...)

Gerard meets The Surgeon and the Pathologist in the tunnels where he immobilizes them in a frequency that stopped them in there tracks. (Read More...)

All three doctors capture Mason and prepare to finalize The Beast's resurrection. They are mauled by their creation. (Read More...)

Marcel is revealed to be The Surgeon. Before he dies, Marcel claims his motives were for the purpose of bringing him back. (Read More...)

The bodies of the Pathologist and Geneticist are seen as Garrett escapes his glass tube. (Read More...)

The flashback of The Surgeon and Pathologist performing Theo's heart transplant appears as Theo is being tormented by his sister. (Read More...)

It is revealed that Garrett Douglas sought the Dread Doctors to help him catch the Ghost Riders, but they double-crossed him and used him to prolong their own lives. (Read More...)

The Anuk-Ite takes the form of the Pathologist in order to frighten Scott. (Read More...)

Through electromagnetic forces, the doctors are able to move through reality as well as have enhanced strength and produce powerful hallucinations.

They can apparently induce life-like hallucinations that can incapacitate anyone who gets in their way. (See Strange Frequencies)

While they are nearly invincible and strong in body and mind, they can be stopped by a frequency from an sonic emitter used by Gerard. (The Sword and the Spirit) 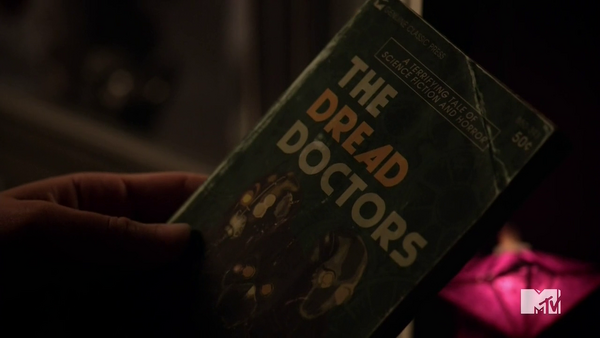 A novel, first seen in Tracy Stewart's room in Episode 504, is titled "The Dread Doctors" by T.R. McCammon. The book's tagline is “A terrifying tale of science fiction and horror.”

The book was actually written by Dr. Gabriel Valack. He says it details an earlier visit from the Dread Doctors.

The back cover reads:

“In a small New England town, teenagers are taken in the night and buried alive. Days later they emerge transformed wreaking havoc and spreading terror, commanded by an ancient order of parascientists known only as the Dread Doctors.”

Valack says he wrote the book to stimulate readers' brains and allow them to remember any interaction they might have had with the Dread Doctors.

Excerpts of the novel are shown on screen. Two pages are transcribed on the Required Reading recap page and two partial pages can be seen on Ouroboros recap page.

Owned by the Surgeon, he uses it as a weapon to killed failed experiments or defend himself. It is revealed to be the pike that Marie-Jeanne Valet used to kill her brother. It was forged steel mixed with Wolfsbane, Mountain Ash and Marie's blood under the light of a full moon. When it is used on Sebastien again, it disappears along with him.

In The Sword and the Spirit, Theo lets Malia use these spiked goggles to find her mother. He explains that all supernatural creatures vibrate at certain frequencies that differ one from another. For them to work, one places the goggles over their eyes, flip a switch, and the spikes shoot out and embed themselves in the soft tissue just below the eyes. With enough focus, Malia was able to pin point the location of The Desert Wolf.

These Masks are imbued with electromagnetic properties that can potentially kill anyone who puts it on. It came into Dr. Valack's for awhile until Theo steals it to find the identity of The Beast.

Dr. Deaton explains that, while the Doctors' experiments may appear to be familiar creatures, they are not supernatural as evidenced by their ability to cross Mountain Ash barriers. The old rules and restrictions do not apply to the subjects of these experiments.

The Doctors created hybrids by combining parts, most seem to have some werewolf traits mixed with more exotic species, to form a chimera. Theo says they are "cheap knockoffs" of the supernatural creatures they resemble.

They would bury their victims in the ground for incubation before they emerged with no apparent memory of these events, then they were sought out by the doctors when they were "Awakening" to finish their construction with mercury injections. (Parasomnia, Dreamcatchers)

If an experiment is emitting black goo, the doctors consider their condition as "worsening" and will either salvage it or kill it. If mercury begins to bleed from their orifices, the experiment's condition is "terminal" and is deemed a failure before being terminated otherwise it will suffer a slow and painful death. (Ouroboros, Lies of Omission, Status Asthmaticus)

Sheriff Stilinski and Melissa McCall have figured out that several of the chimera they know about had skin or other tissue transplants at the hospital in the past. This suggests they were all genetically chimera before the Dread Doctors.

The Doctors performed some sort of procedure on Kira during the events of Creatures of the Night that amplified her powers to uncontrollable proportions.

They pumped black goo into Liam when he was briefly captured. According to Theo, this was a wolfsbane solution designed to suppress his abilities and make it impossible to find their lair again as he attempted the same procedure on Deucalion.

The doctors appear to be slightly out of phase with reality. The bodies blur constantly. A sonic device deployed by Gerard Argent was apparently tuned to a frequency that kept the doctors motionless for an extended period.

The Surgeon seems to be the "leader" of the Dread Doctors. He speaks the most and is the one who killed their first experiment seen on screen (See: Creatures of the Night) and injected Tracy (See: Parasomnia.)

He is revealed to be Marcel, Sebastien's friend who still protected him despite what he had become.

Under the mask, the Surgeon is played by actor Marti Matulis.

In general, a pathologist is a doctor who study the cause and development of disease. Most choose a specialty such as genetics or forensic pathology.

The Pathologist is portrayed by actor Douglas Tait.

As the name implies, a geneticist is a biologist who studies genetics, the science of genes, heredity, and variation of living organisms.

The Geneticist is played for most of Season 5 by frequent Teen Wolf actor and stuntwoman Caitlin Dechelle. Dechelle moved to London midway through filming the second half of the season and was replaced under the Geneticist's mask by Elisabeth Carpenter.

Retrieved from "https://teenwolf.fandom.com/wiki/Dread_Doctors?oldid=237979"
Community content is available under CC-BY-SA unless otherwise noted.