Riders on the Storm
Ghost Riders, part of the myth of the Wild Hunt, are introduced to Teen Wolf mythology in Season 5 but first appear on screen in Season 6.

They appear to be humanoid and dress in cowboy hats and other "old west" apparel. There are many riders but only three are credited; "The Outlaw," "The Enforcer," and "The Ranger."

Originally a Norse myth, it shifted to the "old west" in American popular culture during the 19th and 20th centuries. The 1948 song "Riders in the Sky" by Stan Jones established the Ghost Riders as cowboys forever chasing "the devil's herd" of red-eyed cattle. Dozens of artists covered the song including country singer Johnny Cash in 1979 and death metal band Gorlock in 2011.

In the original myth and newer versions of the legend, the riders take unwary or unsavory characters with them.

"If you want to save your soul from hell a-riding on our range, then cowboy change your ways today or with us you will ride..." - Riders in the Sky

"Woden’s Hunt, also known as the Wild Ride or Wild Hunt. A myth of devilish riders in the sky accompanied by black dogs, spectral beasts whose eyes glowed with fire... A Bearer of Death and Guardian of the Supernatural, the black dog is also known by its more common name, the Hellhound."

They tend to take and erase people who have seen them. The process can be instant, as in the case of the couple who's son was left behind or gradual such as when the memory of Stiles Stilinski seemed to disappear for different people at different times. (Memory Lost)

They take people by shooting them. They also use whips and ropes to grab and erase their victims. The whip carries a supernatural toxin that can kill if the victim is struck but not taken by the riders. Victims disappear in a puff of green smoke. (Superposition, Relics, Ghosted)

Riders deliver those captured to what appears to be a train station that only the riders can safely enter and exit. (Radio Silence)

In the one case we know of, the riders left behind a Banshee (Lenore) despite her ability to see them. Lydia speculates that this may be because the Wild Hunt is connected to the old Irish legend of the Morrígan, a mythical Irish figure that Lydia says was a Banshee. (Ghosted)

Capturing is possible. Mason, Corey, and, Scott constructed a special cage that shielded it from electric currents to prevent the Rider from leaving once he entered the cage. They then surrounded it with Mountain Ash as a precaution. (Heartless)

Killing a Rider was not believed possible until Garrett Douglas killed "The Outlaw." He was infused with their power. Later, Liam Dunbar and Theo Raeken battle riders and were able to kill a few with a bone saw and their own guns. (Heartless, Memory Found)

They appear to have a degree of control over Hellhounds potentially due to the creature's own connection to the hunt. (Heartless, Blitzkrieg, Riders on the Storm)

The Wild Hunt is used to describe the Ghost Riders themselves, the place where those they take end up, and the train that represents the place and the riders moving to a new town.

While not described as such on the show, it appears the Riders and their "train station" exist in a dimension outside normal space and time that is adjacent to our own. This dimension was, until recently, inescapable by anyone but the Ghost Riders.

According to Theo, the Wild Hunt comes and goes and doesn't stay in one place for long unless it's "stuck." (Ghosted)

EDITOR'S NOTE: In an interview with Jeff Davis, he explains that the events of Amplification and Lie Ability related to Kira's power causing an "electrical disturbance" at Eichen are the reason the Wild Hunt was stuck in Beacon Hills. However, it doesn't explain why the entire town of Canaan (Ghosted) was taken as well.

While no one can supposedly escape the Hunt, there have been successes and attempts. In an interview, Jeff Davis said that Stilinski's visage of Claudia was a Ghost Rider who wanted to leave the Hunt.

It used his emotional pain of loss to become real, but it only worked so long as he didn't remember Stiles. The only other time it appeared to have worked is with Lenore's son Caleb who died prior to the Riders coming to Canaan. (Ghosted)

The Anuk-Ite was trapped there by Halwyn until Scott's Pack's interference with the Hunt caused it to be free. (Said the Spider to the Fly)

"I'm a huge western fan. One of my favorite movies of all time is Magnificent Seven. We took inspiration from a lot of different areas, a little bit of The Dark Tower, I would say, Unforgiven, and being able to go to that look to make these ghost riders, these dark cowboys, was really fun. We knew that we wanted their faces to be scary and give an ancient feel to them, as if they'd been around for a very long time." 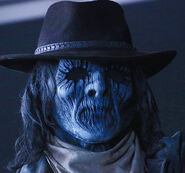