Heart Monitor is the sixth episode of Teen Wolf.

Scott tries to control his transformation so he can spend more time with Allison.

Derek continues trying to make an ally of Scott.

Scott is looking for his car after buying groceries when he suddenly notices that he is being stalked by a werewolf. Despite his best efforts to get away he is eventually caught by the werewolf who is revealed to be Derek. Derek explains that the exercise was part of his training and that if Scott wants to learn to control his animal side that he must do it through anger. He also tells him to stay away from Allison, as she is a distraction and then he breaks Scott’s phone. Scott tells Derek that he will easily be able to stay away from Allison but ends up at her house with his shirt off anyway. Kate Argent interrupts the pair. Allison puts Scott in the closet before letting her aunt into the room. Allison claims she is just working on homework; a history project she has to do on her family.

Kate tells her to look up “La Bête du Gévaudan” as it is a part of their family history. As Scott is sneaking away from Allison’s house he is confronted by The Alpha Werewolf. Scott manages to get inside his car when the alpha draws a spiral on his window. He hurries home to find Derek waiting for him. When Scott tells him about the spiral, Derek realizes something and leaves.

The next day at school, Scott is having trouble avoiding people and finds Stiles Stilinski still mad at him for allowing his father to be hurt and for not returning any of his phone calls during The Tell. Despite Stiles being mad at Scott his new information piques his curiosity and he decides to begin speaking to Scott again.

Believing that Derek is untrustworthy, Stiles resolves to teach Scott himself meanwhile Allison tells her family history to a bored and still traumatized Lydia Martin. Stiles attaches a heart monitor to Scott to help him control his animal side by pelting him with lacrosse balls Scott almost loses control and Stiles stops the exercise. Unknown to them, Jackson Whittemore is watching as Scott breaks the duct tape binding his hands. Later in the locker room Jackson is stalking Scott and Scott remarks that it smells like something is dying. After they leave Jackson begins having hallucinations and sets in action a plan to get closer to Scott through Allison. Meanwhile Derek pays a visit to his uncle Peter who shows signs of coming out of his coma.

Later in class, the constant badgering of Bobby Finstock causes Scott’s heart rate to rise and he almost changes but Allison unknowingly stops him from doing so. Noticing this, Stiles tells Scott to simply think of Allison to stop himself from changing. Stiles decides to see if his conclusion is true by keying someones car and blaming Scott for it. Scott and Stiles both get in trouble and have to serve detention.

Stiles admits that he's not angry with Scott anymore and that he has to do something since he wasn’t bitten by choice. The chemistry teacher decides to let them out. Meanwhile Derek pays a visit to Dr. Deaton as he believes that he is The Alpha. Scott arrives at work to find Derek “interrogating” his boss and lashes out at him. Derek explains that the spiral is a sign “for a vendetta, for revenge,” among werewolves. Scott and Stiles decide to show Derek that Scott’s boss is not The Alpha by howling over the intercom to summon the real alpha. At first Scott lets out a parthetic shrill howl, which annoys Derek, then after Stiles psyches up Scott, Scott lets out a long and loud bellowing howl, which surprise Derek. Suddenly Scott’s boss is gone and the alpha appears and stabs Derek in the back with his claws. Blood pours from Derek’s mouth and frightened, Scott and Stiles take refuge in the school.

Scene: Scott and Allison make out.

Scene: Scott telling himself to stay away from Allison.

Scene: Jackson and Allison talk on floor in hallway.

Scene: Scott tells Stiles he loves Allison in the hallway.

Scene: Scott gets beat up by seniors.

Scene: Scott and Stiles in detention.

Scene: Scott and Stiles test the heart monitor on the Lacrosse field. 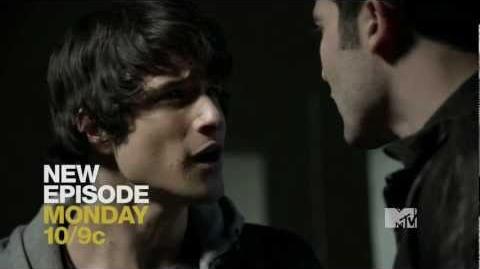