View source
watch 02:56
Doctor Strange in The Multiverse o Madness - The Loop
Do you like this video?
Play Sound

Holland Roden is an American actor who portrayed Lydia Martin on MTV’s Teen Wolf from Season 1 to Season 6.

Holland was born in Dallas, Texas and now lives in the Los Angeles area.

She showed interest in performing at an early age by staging plays and doing impressions of British Monarch Elizabeth II for her family.

While she did take acting classes, Holland had initially planned to become a scientist. She spent a year studying molecular biology but then changed course and pursued acting full time.

She ultimately returned to college and completed a degree in women’s studies at UCLA.

Since entering the profession, Holland has continued to work steadily. She co-starred as Skyler in the Direct to DVD release Bring It On: Fight to the Finish.

Her television credits include roles on Lost (where she played John Locke's mother), Cold Case and CSI.

She also had a guest starring role on an episode of Criminal Minds which was the first show created by Teen Wolf creator Jeff Davis.

Since her casting, MTV uses Roden as host for a number of different fashion and entertainment productions including red carpet interviews and special programming for MTV.com and the MTVStyle brand.

Roden revealed that she suffered damage to her vocal chords due to her character's banshee screams. Roden stated in an interview that some of the damage is permanent. 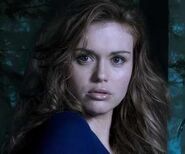