Within the Teen Wolf Universe, The Beast of Gévaudan is described as “History’s most vicious, most famous werewolf.”

The Beast is Sebastien Valet an 18th Century soldier and serial killer living in France. Sebastien is played by French-American actor Gilles Marini.

In Season 5, the Dread Doctors used Mason Hewitt, to create a chimera capable of bringing the Beast back to life.

According to Dr. Valack, the Beast was originally a human in the late 1700s, the time of the original Gevaudan attacks.

Gerard retells the story of Sebastien Valet, a French soldier in the 1760s. While running from British soldiers in Canada, he became a werewolf after drinking rain water from the paw print of a wolf. This allowed him, through unexplained means, to transform into a monstrous werewolf whose body is surrounded by smoke-like shadows. (Read More...)

EDITOR'S NOTE: Jeff Davis explained in an interview that Sebastien was already evil prior to his transformation and becoming the Beast heightened his evil nature.

Once the man became the Beast, there were a number of very different descriptions of it. Witnesses apparently described everything from a red-furred giant wolf to a cloven-hoofed panther the size of a horse. According to The Argent Family lore, the Beast's body was oil-black, solid but shapeless at the same time. It was like a shadow pretending to be real.

Officially, the Beast is accused of killing 113 people. According to the Dread Doctors, via Theo, the death toll was closer to 500. During the time of the original attacks in Gevaudan, many people believed that the Beast simply killed for sport, as it never ate its victims and would only target the head and neck of its prey. Sebastien's best friend, Marcel, covered up his crimes until Marie discovered the truth.

The only weapon that historically proved effective against the Beast was a steel pike wielded by his sister, Marie-Jeanne Valet. The steel was made from Wolfsbane, Mountain Ash and was forged with her own blood under the light of a full moon.

After his death, Sebastien was effectively erased from history. His sister burned everything he signed and everything he owned in a practice known as Damnatio Memoriae.

A similar incidence of this is described by Scott in reference to the Demon Tailor, a real world serial killer. He lured children into his shop in Paris where he would kill them, boil them and eat them. The court ordered that all records of the case be destroyed, thereby erasing his memory from history. The case Scott cites happened in 1598 but he and Stiles link this story to the Beast as well.

Dr. Valack says that the Dread Doctors have managed to create an "engineered version" of the Beast using a teenage chimera as host. Theo explains that they needed a body because they couldn’t resurrect the beast out of thin air. He says the chimera is human during the day and probably unaware that it is transforming into the beast at night.

The Doctors are apparently using broadcast frequencies to force the chimera to manifest the beast nightly in an effort to speed up its development. Chris Argent explains that, as the beast gets smarter and regains the memories of its former life, the teenager inside will be physically gone replaced by the beast's original host.

The Beast was the largest and strongest werewolf on the show. His misshapen appearance is due to a combination of his mental state and his evil nature. As seen with Peter Hale (Season 1), werewolves that are out of control tend to become large, monstrous and somewhat unintelligent.

Allison Argent learns that one of her ancestors killed the beast after his wife and four children were first to fall prey to the creature. (Read More...)

The Dread Doctors appear to have resurrected the beast. (Read More...)

Liam Dunbar and Hayden Romero are chased by the Beast. Later, Scott McCall and Stiles Stilinski investigate the remains of its previous attack. (Read More...)

The Beast menaces Theo Raeken and Tracy Stewart when two of the Dread Doctors tell Theo to stay out of their way.  Scott and Stiles find a possible link between the beast and a child killer from 1598. (Read More...)

The Sheriff's department lead a chase on the creature that leads to the hospital. Scott discovers bloody footprints that change from animal to human. (Read More...)

The Beast sets a trap to lure Scott's pack to their doom but is thwarted by Hellhound Parrish. Later, it appears at the school causing the crowd to run inside. (Read More...)

The Beast terrorizes the school, it runs the halls and attacks Scott multiple times but during the last encounter, Scott catches it scent. (Read More...)

The Beast forms around Mason without a frequency and appears to kill two of the Dread Doctors. When it changes back to human, it is Sebastien Valet in Mason's place. (Read More...)

Sebastien causes havoc through Beacon Hills in order to find the pike that killed him in the past. As he fights Scott, he sees memories of Allison and believes her to be Marie-Jeanne. Distracted, Scott is able to subdue him long enough for Lydia to bring Mason back. Left as a shadow, Sebastien tries to escape only to be stopped by Parrish and impaled by Scott with the pike, killing him once and for all. (Read More...)

La Bête du Gévaudan (French for: The Beast of Gévaudan) is a name given to man-eating wolf-like animals alleged to have terrorized the former province of Gévaudan (modern day département of Lozère and part of Haute-Loire), in the Margeride Mountains in south-central France from 1764 to 1767.

The beasts were consistently described by eyewitnesses as having formidable teeth and immense tails. Their fur had a reddish tinge, and was said to have emitted an unbearable odor.

They killed their victims by tearing at their throats with their teeth. The number of victims differs according to source. De Beaufort (1987) estimated 210 attacks, resulting in 113 deaths and 49 injuries; 98 of the victims killed were partly eaten.

An enormous amount of manpower and resources was used in the hunting of the animals, including the army, conscripted civilians, several nobles, and a number of royal huntsmen.

The Beast being killed by François Antoine 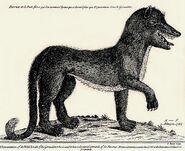 one of the most common depictions of The Beast 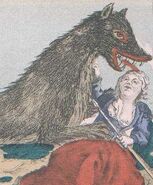 The Beast attacking a woman