He acts as Liam's confidant and partner when solving supernatural mysteries much like how Stiles Stilinski is to Scott McCall.

He is played by Khylin Rhambo.

When they arrive as freshmen at school, Mason is kept in the dark about Liam's werewolf transformation. However, Mason seemed to know something wasn't right and keeps pressing Liam for more information.

After helping Lydia Martin fight off a Berserker and Liam revealing his werewolf nature, Mason becomes enthusiastic to help Scott's Pack. Mason has indicated that he is homosexual. He is attracted to one of the male lacrosse players from a rival team in I. E. D. and dating the chimera Corey.

In Maid of Gevaudan, a pair of size 10 shoes are found in Mason's car causing Scott to surmise that he is the chimera inside La Bête du Gévaudan. He almost disappears from existence until Lydia call him back.

After his experience with the Dread Doctors, Mason continues his relationship with Corey as well as aiding Liam and the pack against Ghost Riders, a Nazi Alpha, new Hunters, and a creature called the Anuk-Ite.

Mason invites people to Lydia's lake house for a party after Liam texts him where he was going. (Read More...)

He helps restrain Liam when he glances at the rival team in anger. Later, at the lacrosse game, he ogles Brett Talbot much to Liam's frustration. (Read More...)

While on a run with Liam, Mason and him are attacked by Garrett. (Read More...)

During the bonfire, Mason who saves the day by turning off the sonic weapon that had disabled Scott McCall. (Read More...)

Mason, again, tries to get through to an obviously upset Liam. He stops pressing to know the problem and instead promises just to be there for his friend. (Read More...)

Mason and Lydia fight off a berserker until Sheriff Stilinski rescues them. (Read More...)

After his experiences in Season 4, Mason becomes obsessed with Berserkers ordering expensive books on the subject. Liam is forced into showing Mason his werewolf nature after Theo Raeken (in wolf form) chases them at school. (Read More...)

Mason hooks up with Lucas at a club called Sinema. Lucas is one of the Dread Doctors chimera, a mix between werewolf and scorpion. (Read More...)

Mason explains to Kira that Kitsunes have trouble with language puzzles. He meets with Brett to discuss how to recognize Chimera. (Read More...)

Mason runs into Corey at the library and realizes that he is a chimera. (Read More...)

Mason goes with Scott and Malia to search for Liam and Hayden at the Water Treatment Plant. (Read More...)

He helps Corey test his strength and is present when the chimera starts to bleed mercury. (Read More...)

He helps Melissa McCall try to save Hayden's life and snaps Liam out of his werewolf state to rescue Scott. (Read More...)

He helps Liam cope with the loss of Hayden and search for the Nemeton. (Read More...)

Mason and Liam help clean up the library and he later encourages Liam to return to Scott assuring him that he won't be turned away. (Read More...)

Mason continues to press Liam to listen to Scott while trying not be seduced by Corey but fails at both. (Read More...)

He tries to figure out how to shut off the power in Eichen House. Hayden helps him before he rams his car into the generators. (Read More...)

He comes up with a theory that The Beast responds to a frequency like the Dread Doctors. While the lacrosse game goes on, he and Corey search a bus for a clue as to who the Beast is. (Read More...)

He approaches his car to see that Scott and Liam have broken into the trunk. Mason wonders what they're doing, Scott accuses him of being The Beast but before this confrontation could go any further, Corey appears and grabs Mason and turns invisible. (Read More...)

He wakes up in the tunnels with Corey, only to soon be taken by the Dread Doctors. They've taken him to their new lair where he's been hooked up to the glowing green tube. (Read More...)

Through the banshee scream of Lydia, Mason is saved from the beast. He is later seen in the library with Corey. (Read More...)

Mason discovers unusual compass readings. He and Liam investigate and find the abandoned home of a missing couple. Mason, Liam, and Hayden investigate the smell of blood at the school and discover a dead man in the boiler room.  (Read More...)

Mason explains that he can't stop thinking about the prior night, where he and Corey had their first encounter with the Ghost Riders, he's read everything there's to know about The Wild Hunt, how they come by storm, collecting souls but he doesn't know why they were in a library (Read More...)

He comes up with a plan to keep Gwen safe by bringing her to Scott's House and covering the doors with Mountain Ash. When the Ghost Riders arrive, he attempts to get her to safety by leaving out back but the Riders are there as well. (Read More...)

Mason is tasked with finding a way to stop the Ghost Riders as he appears to be the one that knows the most about them. He later comes to the realization that the reason the Riders left the party was due to Parrish. (Read More...)

Despite being camouflaged, Mason is still able to find Corey. Mason explains that there's a refraction of light around Corey's silhouette that he can always see. (Read More...)

As Mason, Liam and Hayden prepare to warn the rest of the pack of Garrett Douglas' true identity, a Rider appears. He wraps it's whip around Mason's neck, tugging until Mason disappears. (Read More...)

Mason and Hayden find Corey in the radio room of the train station and after Rider depart, he takes his boyfriend to the hospital. (Read More...)

After 50 or so rats found their way into the school, Mason and Liam headed down into the sewers, where they followed the pipes until discovering a large pile dead rats. (Read More...)

Following a terrible lacrosse practice on both Liam and Corey's part, they planned to study for their nearing history test. However, they discovered a skinless body in the showers of the boys locker room. (Read More...)

After losing in a video game to Liam, Mason offered to help him study. He then asked if he could stay over. Mason was scared as he couldn't get the faceless body out of his head. (Read More...)

Mason watches as Liam is mercilessly beaten by Nolan and Gabe, both of whom sought to expose Liam for being a Werewolf to their classmate. (Read More...)

He and Corey help Dr. Deaton figure out who is causing the fear and paranoia in Beacon Hills and struggles with his feelings of uselessness when the pack leaves following the skirmish at the Sheriff's station. (Read More...)

Mason leads Nolan into a trap at the Hill Valley Zoo, where Liam and Theo were awaiting his arrival. With the hunters shooting to kill, Theo sends Mason home for his own protection. (Read More...)

Mason and Theo search the tunnels for Aaron, during which time, Mason tells Theo that he has no place in the pack. He'll never forget what Theo did to Scott and Melissa. (Read More...)

Mason and Corey drive the hospital to see what Liam found only to figure that the Hunters are about unleash their ultimate attack. (Read More...)

While hiding in a vacant room as the hunters lock down and search the hospital for them, Mason tells Corey that he loves him. They then share a kiss. (Read More...) 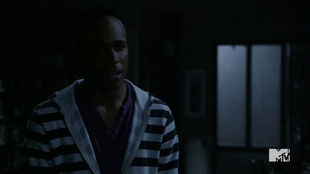 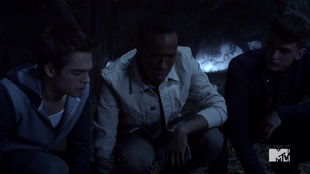 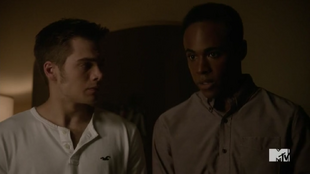 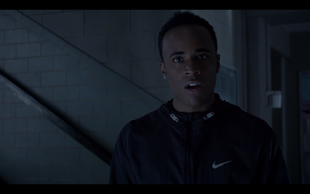 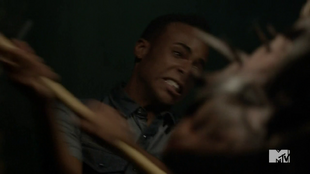 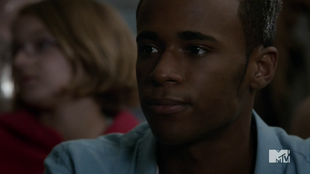 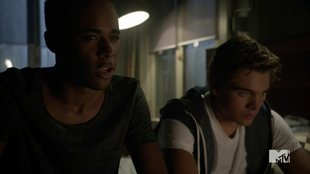 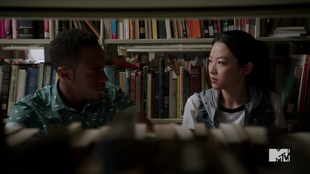 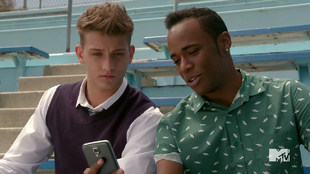 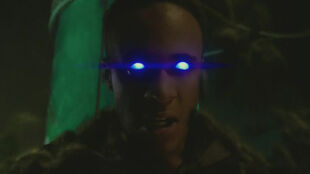 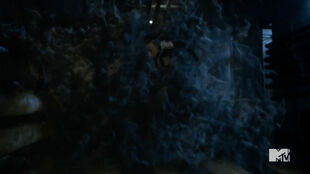 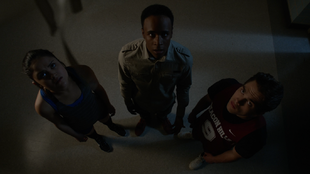 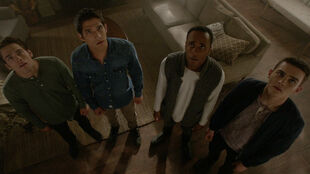 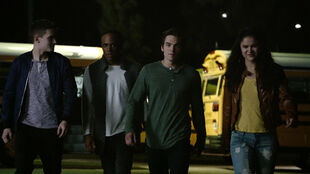 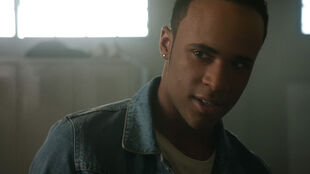 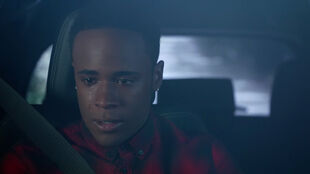 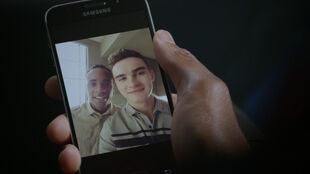 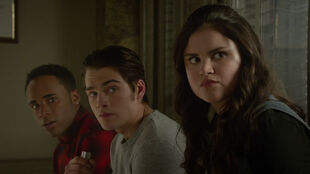 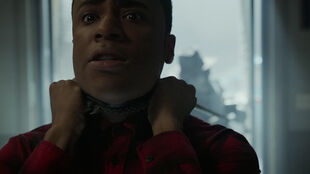 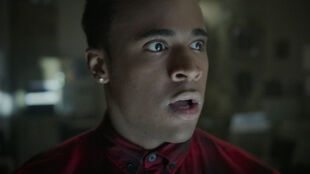 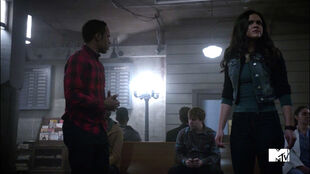 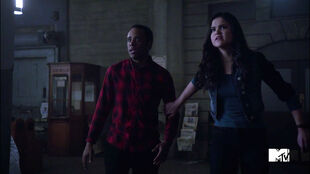 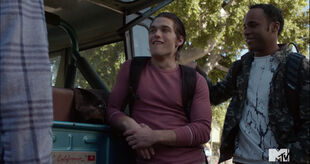