Peter Hale, as The Alpha Werewolf, was the primary antagonist during the first season of Teen Wolf.

His return from the dead was a major highlight of Season 2.

Peter Hale was born into a family of werewolves and has always resented that his sister, Talia Hale, reached Alpha status in the pack, believing that place rightfully belonged to him.

Even as a teenager, Peter was manipulative. He convinced his young nephew, Derek Hale, that Paige, his girlfriend, would leave him if he didn’t have her turned into a werewolf.

When arsonists attacked Hale House, Peter survived while most of the family died. He was badly burned and went into a self-induced coma to heal. While he was out, Peter’s mind raced with thoughts of revenge. He blamed Talia for making the family weak and plotted to kill all the supernaturals in Beacon Hills and remake the town in his own image. Meredith Walker overheard his thoughts and would later enact this plan. (See: The Benefactor)

Six years after the fire, Peter seemed to have forgotten his plans for a new Beacon Hills. Instead, he sought revenge on the arsonists who had burned down Hale House. While seemingly still in a non-responsive state and with the aid of his nurse, Peter managed to kill his niece, Laura Hale, and take her Alpha status for himself.

He began building a pack by biting Scott McCall. It was this act that eventually led to the exposure of his revenge plan and Peter’s “death” at the hands of his nephew Derek.

Another bite would be his salvation.

Knowing that Lydia Martin would be “immune” to the werewolf bite, Peter attacked and bit her. Through the bite, he implanted his memories into her just prior to the final showdown with Scott and Derek. Once Lydia recovered from the bite, the memories took the form of hallucinations that instructed her on the means to bring Peter back from the dead.

She found Peter’s body buried under Hale House surrounded by wolfsbane. She then used wolfsbane hidden in drinks to drug Scott and anyone else who might interfere. She collected Derek, now an Alpha, by knocking him out with wolfsbane powder and dragging him to Peter’s body. The full power of the full moon and Derek’s Alpha spark allowed Peter to heal fully.

Peter claimed the return to life left him weak and he stayed near his nephew for months subtly manipulating him. Peter stayed out of a conflict with a pack of Alphas until the very end when he killed a rogue druid and declared himself “The Alpha.”

Peter further insinuated himself into Scott’s group of friends by aiding in the rescue of Stiles Stilinski from possession by a Nogitsune and in the process learned that he has a daughter. He believes Talia took the memory of the baby and her mother from his mind.

He is still bitter about Scott's rise to True Alpha status and wants to regain the status and power his family once enjoyed. He feels that the fire and Scott robbed him of his birthright.

He resided at Eichen House in a special ward for supernatural threats until Scott and his pack rescue Lydia from Eichen House where he seized the opportunity to escape. (Amplification, Lie Ability)

Later, he is taken by the Ghost Riders and was missing for three months. He and Stiles find each other and reluctantly helped each other to find a way out and slowly earns his daughter's trust and right to be called her father.

When the Gerard recruits Tamora Monroe and reorganizes the Hunters, he initially wants to flee but eventually joins the fight and earns a place as an ally in Scott's pack.

Peter, as The Alpha Werewolf, seeks revenge on the people who burned Hale House and killed his family. (Read More...)

Peter manages to come back from the dead by manipulating Lydia Martin. (Read More...)

Peter keeps to the shadows as his nephew faces The Alpha Pack.

He then helps save Stiles from the Nogitsune in exchange for information about his long lost daughter Malia Tate. (Read More...)

Peter works with Kate to gain Scott's Alpha powers and is later locked up at Eichen House. (Read More...)

After escaping the Wild Hunt, Peter is left badly injured in the woods. His roar can be heard throughout Beacon Hills. It's not long before Malia and Scott find him. Hoping to make it easier on Peter, they take away some of his pain. (Read More...)

Peter wants Malia to leave town with him. She refuses to do so without Stiles, he says her loyalty is overrated. Then telling Malia to run as he'll hold off the approaching Ghost Riders. (Read More...)

Peter arrives at the bunker just in time to stop the Ghost Riders from killing Malia and Scott. He holds the Riders off long enough for them to get away, but he is shot and erased in the process. (Read More...)

He is snapped out his blank state by Malia and he helps her and eventually Scott fend off the Ghost Riders. (Read More...)

Despite his initially refusal to join Scott in the fight against Gerard and the hunters, Peter agrees to help after both of his valuable cars are destroyed during an attack instigated by the hunters. (Read More...)

He and Lydia search for Scott and Malia only to get set upon by Hunters after finding them. (Read More...)

Peter arrives at the school to the sight of two petrified hunters. He is soon turned into stone by the Anuk-Ite. (Read More...)

Peter in the Hale House Fire

Uncle Peter is that you?

Wait... aren't you supposed to be in a coma

Just three guys hanging out in the shower 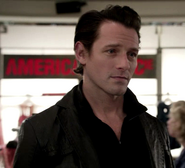 Not So Final resting place

I heard there was a party

someone actually made an animation of it

Peter juices up on Epinephrine

Peter and Scott take on the twins

What's with the hole?