View source
watch 02:56
Doctor Strange in The Multiverse o Madness - The Loop
Do you like this video?
Play Sound

Mieczyslaw “Stiles” Stilinski is one of the main characters on MTV’s Teen Wolf and Teen Wolf: Search for a Cure.

He is the son of Sheriff Stilinski and Scott McCall’s best friend. He was the first member of the Teen Wolf Pack and continued to help Scott throughout high school as he faced the various complications of being a young werewolf.

After high school, Stiles left Beacon Hills for an internship with the US Federal Bureau of Investigation. He is currently attending a six-month program at Quantico, Virginia.

He is portrayed by Dylan O'Brien.

His mother, Claudia Stilinski, died when he was a child. He was present when she passed and has never gotten over her death. For some unknown reason, Stiles blames himself.

Stiles is sarcastic, funny and outspoken. He is extremely clever and has led the way in working through many of the mysteries in Beacon Hills. At times, he was frustrated that Scott's new abilities cast him as Robin to Scott’s Batman, but he is a solid friend and loyal to a fault.

From the time Stiles was in 3rd grade, he loved fellow classmate Lydia Martin. It was, for the most part, an unrequited love until their relationship grew from a strong friendship to genuine affection and then deep love for one another.

While they have a typically combative parent/teenager relationship, Stiles loves his father very much and often worries about his safety.

Stiles relationship with Derek Hale is awkward and adversarial. Scenes featuring the two characters offer some of the show's funniest moments.

Stiles apparently lost his virginity during a brief stay at a mental institution (See Echo House) with werecoyote Malia Tate. They were a couple for a while and Malia still considers Stiles to be the "anchor" to her humanity despite their ended relationship.

Stiles' life became more complicated after "dying" as a surrogate sacrifice. Waking dreams and lost time caused him to believe he might be losing his mind. The incident led to his being fully possessed by a Nogitsune. With the help of his friends, he was able to break free of the void and fully recover.

After seeing the Ghost Riders, Stiles is removed from everyone's memory and is trapped in limbo with hundreds of other forgotten souls. Lydia is able to hold onto his memory and he's brought back by the love of his friends in Riders on the Storm.

After graduation, Stiles moves to Virginia to participate in an internship with the FBI. He teams up with Derek and returns to Beacon Hills to face the Anuk-Ite. He is last seen - at some point in the future - still working with the pack to help the supernatural world.

Stiles helps his best friend deal with The Alpha Werewolf after Scott is bitten and turns into a werewolf. (Read More...)

Stiles dies and comes back in order to save his father from the Darach.

He is then possessed by a Nogitsune and wreaks havoc on his friends. (Read More...)

Stiles and Malia have become closer. He's been teaching her to be more human. (Read More...)

He goes through an internal crisis of morals after killing Donovan.

Stiles' friendship with Scott nearly dies but they make up before the Dread Doctors' success destroys the town. (Read More...)

Determined to find a young boy's parents, Stiles encounters the Ghost Riders. The riders erase him from the memories of his family and friends and then take him away. (Read More...)

Stiles is heard in Lydia's mind when her subconscious relives the memory of Stiles being taken by the Ghost Riders. (Read More...)

Stiles makes several attempts at escaping the train station, with each attempt as unsuccessful as the last. He manages to get in contact with Scott and Lydia through an old ham radio. He tells them to find Canaan. (Read More...)

Stiles appears in several flashbacks as Scott and Malia enter the cooling chamber, and Lydia undergoes hypnosis. It is then that a rift is created and from that, someone appears. (Read More...)

Stiles returns just as Garrett Douglas begins merging Ghost Rider limbo with the real world. He reunites with his friends, declares his love for Lydia and talks of heading off to college at George Washington University in Washington D.C. (Read More...)

Shortly after arriving at FBI headquarters in Quantico, for his internship, Stiles discovers that Derek is the target of the FBI's crisis response team. He is supposedly wanted for mass murder. (Read More...)

He returns to Beacon Hills with Derek after rescuing him from the FBI manhunt for him and provides the Mountain Ash that is used to destroy the Anuk-Ite. (Read More...)

The blue and white ringer t-shirt is the first thing Stiles puts on when he finally "wakes up" in Anchors. He wears it again the day after he and Scott discover Malia's Den in More Bad Than Good.

Then, in Galvanize, an apparent production glitch places him in the shirt for less than a minute in the middle of a scene. One second he is wearing another shirt - he then is seen wearing the ringer t-shirt - in the next shot he's back to his original wardrobe.

There is, as of the end of Season 3, no explanation for this phenomenon.

This character’s name was, for years, the source of confusion and dispute. In the Season 5 episode Ouroboros a student ID showed the name "M. Stilinski" this was reinforced onscreen by an MTV suggested hashtag #MStilinski.

In the Season 6 episode Superposition, Lydia's automatic writing of the word "Mischief" creates a word cloud image of the letters "S T I L E S." Teen Wolf creator Jeff Davis says this is "a clue, it’s a definite clue" and "that word was not chosen randomly."

In Blitzkrieg, his name is revealed to be Mieczyslaw which is a combination of the Polish words for "Sword" and "Glory." As a child, Stiles had trouble pronouncing his name and instead called himself "mischief" which his mother adopted as a nickname.

Early publicity for the show[1] identified him as “Stan Stilinsky” as did the pilot cast list for “Wolf Moon” at IMDB.

During the episode The Tell, a very brief shot of his school records showed his last name spelled “Stilinski”. MTV also uses this as the character name on their website.

Complicating the question of Stiles’ surname further is the fact that his father was identified as “Sheriff Stilinsky” in all episode cast lists[2], the main cast list for the show[3] and in much of the publicity surrounding the show. In Formality we see, for the first time, the name tag on the sheriff’s uniform which says “Stilinski” (see images).

Later listings of the cast have the character name as simply “Stiles” and this is the nickname all characters use when addressing him on the show.[4]

Further complicating the name issue, is the fact that his father is identified in the credits for theSeason 2 episode Omega as "Sheriff Stalinski".

During The Tell, Coach Bobby Finstock made fun of Stiles’ first name. He said it amounted to child abuse.

The joke was revived in the Season 3 episode Riddled when the doctor performing the MRI says he's unsure how to pronounce Stiles' first name or believes it to be a misspelling.

Tyler Posey told the Comic Con 2011 panel that viewers will learn his first name and will “crack up” when they do.

On the August 19th episode of The Fantastic Show, Jeff Davis said "A lot of people think that he doesn't have a first name, that I don't know what it is but I do... and it's very difficult to pronounce." He refused to reveal the name saying "Maybe in the last episode of our series... the series finale maybe."

Fans were kept waiting for five years, until Season 6, for the answer.

Shutting of the dead pool

Malia waking him up 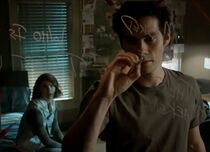 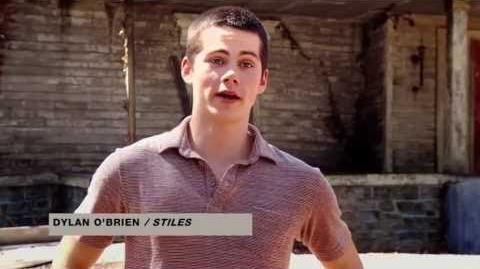