watch 01:47
Wiki Targeted (Entertainment)
Do you like this video?
Play Sound

The Alpha Werewolf was the chief antagonist, the “big bad”, of MTV’s Teen Wolf during the first season. It is simply known as “The Alpha” throughout most of the episodes.

In Wolf's Bane it is revealed that The Alpha was Peter Hale.

EDITOR'S NOTE: This article covers "The" Alpha Werewolf - Primary Antagonist of Season 1. For details about the general topic of Alpha Werewolves see the Werewolf page. For other uses see Alpha Werewolf.

The mystery of The Alpha’s identity drove much of the story throughout Season 1.

Derek Hale claims the villain is trying to build a pack. Scott would apparently be the first member if he is willing to kill with “The Alpha”. If he declines the privilege, The Alpha will kill him.

According to Derek “The Alpha” is more powerful and dangerous than either he or Scott and has the power to mentally call to Scott and force him to transform into his wolf form.

After the events of Heart Monitor it appears Scott and “The Alpha” share some sort of low level telepathy.

“The Alpha” was kept mostly unseen in shadows until Heart Monitor when he attacked Derek. It appears to be more than seven feet tall when standing on his hind legs and almost completely wolf-like with glowing red eyes. At the end of Lunatic, we saw it transform back into a human but did not see the Alpha’s human identity.

As The Alpha, Peter Hale is officially blamed for five deaths, most of his victims were directly or indirectly involved in the fire at the Hale’s home. In Pack Mentality he killed the bus driver who had been the insurance investigator that worked the arson investigation. The Video 2*C employee killed in The Tell and the two tough guys killed in Lunatic were known arsonists.

Peter says he killed Laura Hale by accident before the beginning of Wolf Moon and the janitor in Night School seems to have simply been in the wrong place at the wrong time. 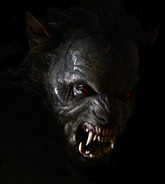 Add a photo to this gallery
Retrieved from "https://teenwolf.fandom.com/wiki/The_Alpha_Werewolf?oldid=233903"
Community content is available under CC-BY-SA unless otherwise noted.