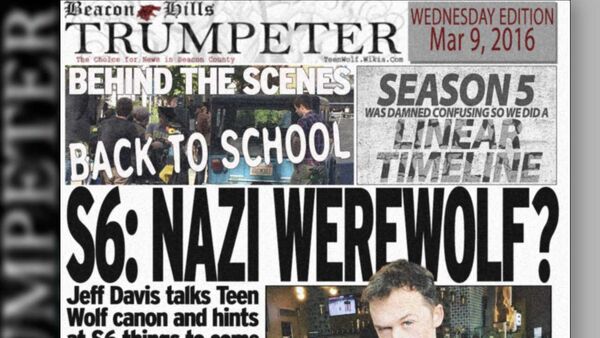 This isn’t canon but is my way of piecing together this seasons sometimes confusing timeline.

I am 100% positive I left out a bunch of stuff that y’all have questions about. Hit me up in the comments with stuff I left out and I’ll do my best to add it to the right spot on the list.

As promised, I inundated Teen Wolf showrunner Jeff Davis with your questions this week. As is his way, Davis answered some of them straight up and with some others he made with the cryptic.

There are a number of areas like casting and spoilers that he really can’t talk about due to edicts from the network. Other stuff he keeps vague because the writers need to leave themselves some wiggle room for future stories.

Q. Which main characters are for sure leaving the show and who is for sure staying?

A. “Too much of Season 6 is uncertain (and there are still a few outstanding actor deals to work out) so I have to leave some of the who is staying and who is leaving to MTV Press. But I can tell you that we’ll definitely be focusing more time on Liam, Mason, Hayden and Corey and the ups and downs of those relationships in future episodes.”

Q. Are you going to miss writing for Theo?

A. Cody was always a pleasure to write for. And there’s something about writing dialogue for a villain that allows you to tap into your darkest side. It’s kind of cathartic. I may be saying 'goodbye' to his character as I step back from the show a bit, but for the audience it may be more of a 'see you later.'"

A. “MTV Press prefers that I not mention. But yes, there will be another returning character or two this season. We almost had one person return this season but the negotiations didn’t work out unfortunately.”

Q. What's your favorite thing about your concept and the early scripts for Season 6?

A. I love the new mythology we’ve come up for this season. It reinvents the show in a way that we hope is satisfying to the audience.”
“If last season was a “Monster Movie” this season will be more of a psychological thriller, more of a ghost story actually. It’s definitely a challenging season, having to rush back into production, working around actor schedules and trying to keep things fresh after eighty episodes. But we’re still excited by the stories and the relationships. And we’re still trying to scare the hell out of the audience.”

A. “As you’ve seen from the final image of the last episode, we may be exploring this in the future.”

Q. February last year I learned that you were considering a Season 6. Before that point it seemed Season 5 would be the last. How different was this Season Finale from what you and the writers initially conceived as the Series Finale?

A. “We’ve had various and vague ideas on how to end the show for a while, but nothing actually concrete because the network had been hinting for a while that this might not be the end. It’s now getting a bit hard to tell when the show might actually end. No one has ruled out a Season 7 yet.”

Stydia or Stalia or Why Not Both?

Q. No one deserves the “It’s Complicated” Facebook relationship status more than Stiles and Lydia and Malia. In your head, where do all these folks' relationships stand now?

A. “This very question becomes a main focus of Season 6 and is dealt with heavily in the first episode.”

Q. Do you want to elaborate on the love that drove Marcel to dedicate more than a century of his life to bringing Sebastien back? Also, I assumed but might as well ask, Sebastien was an evil killing bastard before he became a werewolf, right?

A. No elaboration necessary :) and yes, Sebastien was born a monster.

Q. Does erbody know Scott be a werewolf now? You know, after the fight in the library last week.

A. The traumatized witnesses in the high school that night probably gave police reports that described 'two lacrosse players bravely taking on what appeared to be a giant, rabid bear in the library.' There might be a few kids who look at Scott differently, but most will probably chalk it up to 'It’s Beacon Hills, dude.'"

Q. We saw an obvious physical effect of Scott putting his pack back together this season. Was his speedy healing something psychological on his part (like in Season 3a in Angela Harvey’s wonderful Frayed) or are we getting into the whole “Packs make an Alpha stronger” territory?

A. "We believe it’s a little bit of both. The loss of healing ability can be psychological. It comes from guilt, as we’ve seen before with both Scott and Derek. But the pack actually makes all of them stronger which is part of theme of our show. That the bonds of friendship can make you both emotionally and physically stronger."

Q. Along that line, when Scott roars, members of the pack light up (literally) and seem to get stronger. Is this an adrenaline rush sparked by the roar or some sort of “pack membership makes Betas stronger” thing? Also, does the effect extend to the non-supernatural members of the pack?

A. “The roar is a kind of clarion call for Scott’s betas. And that can certainly extend to the non-supernatural members. We use the eye glow to show how his roar can actually give his Betas strength and courage at the same time. For us it’s a little like King Theoden striking his sword against the spears of the Rohirrim, rousing them to battle."

Q. Putting aside the Desert Wolf’s motives, methods and future plans for a moment, is “loss of power in child birth” a common occurrence among weremoms or was this a one-off situation with Malia?

A. “In the world of Teen Wolf, it's specific to Werecoyotes. So far...”

Q. Should wannabe werewolves be looking for any old wolf paw print to sip from? Why bring this obscure piece of werewolf lore into the TW universe and create, what appears to be, a whole new type of werewolf?

A. “We love obscure lore in Teen Wolf. Just look at the myth of the Kanima. Almost nothing is written about it. This does not mean it’s a whole new werewolf, however. In effort of not over explaining, the Beast was definitely a very powerful werewolf, but that may have more to do with just how purely evil Sebastien Valet was.”

Q. Was that a real Oni in the desert or just a manifestation created by our new Skinwalker friends?

A. “Manifestation created by the Skinwalkers.”

Q. What kind of Kitsune is Noshiko?

Q. If you can, please clear this up - Demon Wolf is just hyperbole or a real thing that someone might actually become?

A. “We considered it part of the bizarre process of heightening his power. Belasko (Belasco) also means son of the raven.”

As is always the case, I probably left out one of your burning questions. I apologize if that is the case. While Jeff is "stepping back" from the day to day on Teen Wolf, we plan to stay in touch and will have future opportunities to overload him with questions.

Teen Wolf Season 6 filming continues this week without Dylan O'Brien. He has reportedly arrived in Vancouver to begin pre-production work for the new Maze Runner movie. Teen Wolf is working around his schedule to keep O'Brien on the show. He will be returning to Los Angeles occasionally to continue work on Teen Wolf in the coming weeks.

This week the only evidence we saw of Stiles was his jeep at Palisades Charter High School which doubles for BHHS on Teen Wolf. Holland Roden was on set along with Tyler Posey and Shelley Hennig. 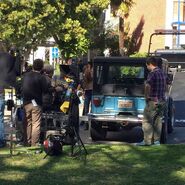 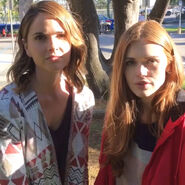 Add a photo to this gallery

They'll be filming later this week at a location just a few miles away from their Northridge HQ. While they're still close to home, the locations available in this area of Los Angeles offer everything from suburban to Saharan.