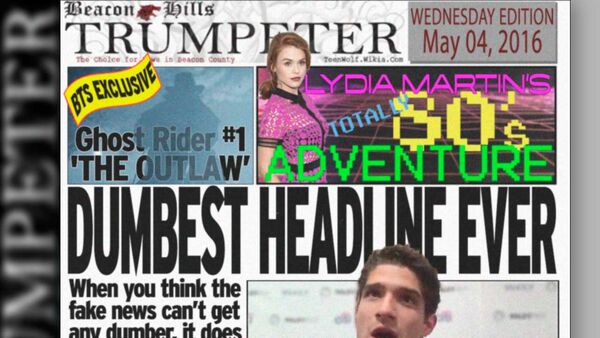 According to a statement relayed to Teen Wolf News from 20th Century Fox, production on the new “Maze Runner” sequel will be shut down for a much longer time than executives initially expected. The studio says Dylan O’Brien‘s on-set injuries are more severe than initially thought and production will shut down for “the foreseeable future.”

“The resumption of principal photography on Maze Runner: The Death Cure has been further delayed to allow Dylan O’Brien to fully recover from his injuries,” the Fox statement reads. “We wish Dylan a speedy recovery and look forward to restarting production as soon as possible.”

Earlier the studio had announced plans to resume filming on May 9th in and around Vancouver, British Columbia.

O’Brien’s publicist also spoke out about the star and the delay. “His injuries are very serious and he needs more time to recover,” Jennifer Allen said.

On March 17th, O’Brien was filming a stunt on set when something went wrong. WorkSafe BC, the agency that investigates all workplace injuries in the province, has recently released details about the accident.

A source speaking to Teen Wolf News on condition of anonymity explained further that “(Dylan was) yanked to the ground by his own safety vehicle and dragged under it.”

O’Brien returned to Los Angeles late last month to recover and met with his medical team last week. It is believed that his doctors reassessed his condition at that time and notified the studio that he could not return as quickly as hoped.

Fox did not comment on whether or not the longer delay would impact the film’s scheduled February 2017 release.

Dylan O’Brien’s Maze Runner co-star Dexter Darden spoke to TMZ this week about the accident and the filming schedule.

Darden goes on to explain that filming on “The Death Cure” is on hold while Dylan heals. “He broke like three bones in his face,” Darden says indicating the right side of his face. “He’s healing well. He had surgery.” He goes on to say that Dylan is “healing” and looks “fine” and that “as soon as all that’s done, the scarring and all that stuff, we going to be back to work.”

There’s a photo circulating among Dylan O'Brien fans that has some folks believing the injured actor visited the Teen Wolf Set on April 27.

The image, posted by Melissa Ponzio to Instagram, shows crew members behind the scenes setting up for the morning’s work.

The figure here, wearing Stiles Stilinski signature plaid and Dylan’s favored baseball cap, is thought by some to be O’Brien.

Unfortunately, closer inspection reveals it is likely not the actor.

This seems to be a case of some similar clothes and a lot of wishful thinking.

Teen Wolf News spends a lot of time tracking down rumors and confirming or disproving them in order to bring you the latest LEGITIMATE news about the show.

Other “news” outlets, not so much.

This week we saw what is possibly the dumbest of the fake news headlines to ever make it into print.

Variations of that headline appeared on more than two dozen “news” websites this week. In case you’re not up on your pop culture icons, Harry Styles is part of British pop group One Direction.

Even knowing this was a ridiculous piece of nonsense, TWN nonetheless sent it over to Teen Wolf creator Jeff Davis for comment.

In case it doesn’t render properly on your device, that’s the “grimacing face” emoji we got from Jeff Davis.

Teen Wolf Tyler Posey was a bit blunter in his assessment of the reporting. “That's a pretty silly rumor if you ask me,” He said on Saturday. “Do you guys really believe that? Couldn't be further from the truth!”

While the dumbest of the dumb, this story is an excellent litmus test of news sources. If someone published the Styles/Stiles thing as actual news, you should avoid them when looking for legitimate sources of Teen Wolf News.

Here’s a handy list of some of those untrustworthy sites –

Teen Wolf Takes Us Back to the 80’s

This week’s filming saw Teen Wolf’s Lydia Martin take a brief jaunt outside Los Angeles and possibly back to the 1980’s as part of a flashback scene.

This news leaked via a casting notice for a "Holland Roden photo double" and extras with “"80's HAIRSTYLES 18-50," further described as like "Duran Duran" and early "Madonna.”

While this too sounds a little like a ridiculous fake news item, Teen Wolf EP Jeff Davis says it’s legit.

“It's true. There's a brief flashback to 1987. Although I wasn't expecting Duran Duran hairdos.”

Indeed, shortly after we talked with Davis, that call for extras was altered to change the ages and remove the pop music references –

Pomona is about an hour away from Teen Wolf’s New HQ. Just what the production needed there that they couldn’t get closer to home is still unknown.

We got a couple of behind the scenes images from the shoot but nothing that showed off the 80’s accoutrements or that unique Pomona imagery that justified the travel.

The Ghost Rider is Coming

Teen Wolf News ran across this image this week.

It appears to be a legitimate call sheet from the Teen Wolf production for Thursday, April 28.

Some might consider this to be a spoiler but, on its own and since we don’t know the context of this information, the following doesn’t give away any of the actual plot or the outcome of this episode. Still, if you are hypervigilant about avoiding any hint of what's to come - Turn Back Now!

Among the items of interest –

The boys decide to go after the missing lacrosse players

They are shooting episodes out of order this season. This sheet suggests they were doing scenes for both episodes #603 and #604 last week

Teen Wolf Writers Behind the Scenes

This week we got a glimpse behind the scenes thanks to writers Angela Harvey and Will Wallace.

We also got a look at writers Eric Wallace goofing off uh ... working in the Writers' Room.

An earlier version of this story misidentified one of the writers as Ian Stokes. We regret the error.

Retrieved from "https://teenwolf.fandom.com/wiki/User_blog:Paul.rea/Teen_Wolf_News_050416?oldid=220166"
Community content is available under CC-BY-SA unless otherwise noted.