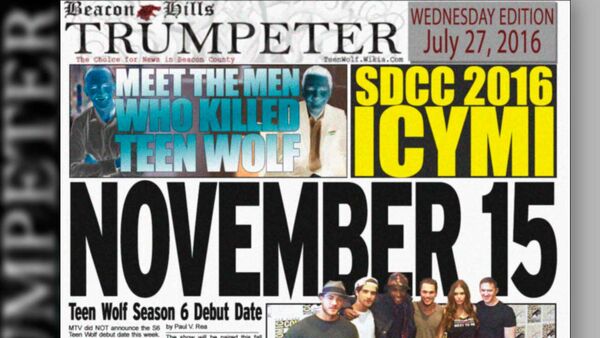 MTV did NOT announce the Teen Wolf Season 6 debut date this week. Instead, they included at the bottom of an MTV News article about the release of some “virtual reality” videos instead.

It was such a matter-of-fact way to drop the date, one that literally thousands of Teen Wolf fans are clamoring for, that many missed the mention of November 15 altogether. There’s been no other public confirmation that November 15 is the actual debut date for Season 6 but, if any outlet should know, you would think it would be MTV News.

Many had hoped the date would be announced at Comic Con but the network folks were so busy crushing our dreams of a Season 7 that the news got lost maybe? It may also be a ploy to get more people to click on that particular article since the piece and the videos within are all sponsored by AT&T and the more clicks on the article the more “fan interest” MTV can show to the sponsor. Either way – it’s out there now.

Here’s a curated collection of the Teen Wolf stuff that went down at Comic Con last week.

The Men Who Killed Teen Wolf

Most folks were shocked by the announcement that Teen Wolf won’t be back for a Season 7 but there have been warning flares coming from MTV for several months.

The first signal that Teen Wolf's days were numbered came back in July of 2015 when programming chief Susanne Daniels left MTV.

Daniels came aboard the network with much fanfare back in 2012. She’d been the brains behind the WB/CW back in the days of Buffy the Vampire Slayer, Gilmore Girls, Dawson’s Creek and Smallville. As Teen Wolf News reported at the time, fans hoped this signaled great things for Teen Wolf and, perhaps, a renaissance of the type of quality genre programming that was, at the time, sadly lacking on network and cable.

Her time at the helm barely made a ripple. Daniels oversaw high-profile scripted failures like Eye Candy, a handful of sitcoms and moderate successes SCREAM and Shannara Chronicles.

Daniels gave up and ran over to YouTube last summer. She wasn’t alone in abandoning ship. In the past year and a half, MTV parent Viacom lost at least ten “top” executives, four from MTV, but not all were fleeing. Viacom went through a significant reorganization in 2015. They consolidated three network groups into two, entertainment and kids & family. That meant some long-timers were actually pushed overboard.

Daniels’ position, MTV president of programming, was left empty. The network’s programming department was mostly rudderless for eight months. Pretty much all the scripted programming currently on MTV’s schedule was started by Daniels before she left.

A few months after Daniels' exit, in September 2015, MTV Network President Stephen Friedman was replaced by Sean Atkins. Atkins had been overseeing Discovery Digital Networks which is a mishmash of streaming reality shows on travel, science, technology and pop culture.

Hiring Atkins signaled MTV was making a wide turn to a new course - back toward reality programming. This signal was reinforced when they finally found a replacement for Susanne Daniels.

In March the network hired Michael Klein to be head of programming. As Teen Wolf News reported at the time, Klein’s roots are also solidly in the reality TV realm. his most recent posting had been at Conde Nast where he created a news magazine program and reality-based online content to support the company’s magazine lineup. Klein was previously with the Sundance Channel where he also developed a number of reality shows.

Kline’s hiring was perhaps the clearest warning that Teen Wolf and MTV’s other scripted fare were no longer a priority a fact that would become evident when the network released its development slate just a month after he took the helm.

The All-New (but not really) MTV

At the annual “upfronts” with media and advertisers, Atkins touted new reality shows, game shows, music shows and shows that only appear on Snapchat. There were only three new scripted programs out of 11 presented. Two comedies and dramedy Sweet/Vicious which will debut alongside Teen Wolf this fall. Two of their “new” shows, Cribs and Unplugged, are actually retreads of old MTV shows.

There was also none of the usual upfront fanfare and performances with actors presenting what advertisers could expect from the new seasons of existing shows. Teen Wolf, SCREAM and Shannara garnered barely a mention.

Atkins was asked by The Hollywood Reporter in April, “How much more life is left in current scripted shows like Teen Wolf, Faking It and Awkward?”

He told the trade magazine, “We haven't made any decisions on those shows. We've been focused on priming the pump (with new programming), and you'll be hearing in the next few weeks and months about some of the other pickups we're doing on some of the franchises that are a little older. Awkward, Teen Wolf and Faking It are still strong providers for us.”

Despite those vaguely reassuring words from Akins, he and Klein cancelled all of the shows mentioned.

Perhaps the loudest warning of all, the death knell for Teen Wolf, came in May when we learned MTV and the Teen Wolf Production failed to apply for California’s film tax credits which have helped pay for about a third of the cost for every season since 2013. Without those credits in place, filming in California was financially out of the question.

Klein then began signalling the end of Teen Wolf to the other powers that be within the production. The network kept a tight lid on the news for more than a month before the big reveal at San Diego Comic Con in July. Executive Producer Jeff Davis was only able to email crew members just prior to the announcement. It was his effort to at least let them know before general public.

Industry sources tell us Klein is still paying lip service to supporting new scripted programming on MTV but, so far, there's nothing coming out of the network to suggest he’s sincere about that.

Klein and Akins did do Teen Wolf creatives and fans one favor in announcing the end so early. Jeff Davis and his writers’ room now have time to plan how the series will wrap up.

While there’s not much room to make major changes to the first half of Season 6, the back end is a blank slate of ten episodes in which Davis can end things on his own terms. Series star Tyler Posey is set to direct an episode and there’s a chance (albeit a slim chance) that fans might see a few familiar faces as former stars drop into Beacon Hills before all is said and done.

Fans can also look forward to the fact that Teen Wolf Season 6, which bows on November 15, will still be running deep into 2017 meaning they won’t be truly without the show for a good long time to come.